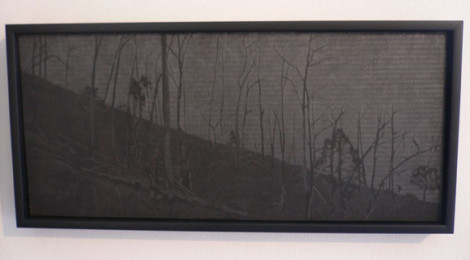 Structure to reflect the way Ghost Mountain stages itself.

Begin by identifying building as a key concern for Sydney artist Sean Rafferty, whose work consistently exposes how things are built, by us, in certain ways (houses, art installations, memories, ideas of ‘nature’ or ‘home’ etc.). Also note the artist’s particular interest in the role of images in shaping such constructions.

Writing to remain in provisional note form, as in fictional works by Georges Perec and others (see Dave Eggers’ Notes for a Story of a Man Who Will Not Die Alone).

Setting 1. Exterior – A temporary cardboard wall on timber frame, leading off into a dark passageway. Two framed photographs, scraps of paper taped to and around wall, one being a photocopy from the artist’s journal in which he considers what to include in this installation (diagram of sun-bleaching frame etc.). A receipt of films borrowed (Long Weekend, We of The Never Never, Walkabout, Alvin Purple, The Story of The Kelly Gang). Copied pages from Haruki Murakami’s novel Norwegian Wood and Kurt Vonnegut’s Bluebeard. The photos, and nearby shimmering lead drawings on black painted cardboard, Ascent II (2008) and Ascent III (2008), are of still, ominous landscapes (scenes from the above movies?).

Setting 2. Interior – Ghost Mountain (2008) Projected image of photo showing a white gate beneath a mountain ridge and dense sky. Whistling wind fades out as image disappears, leaving a large piece of cardboard on which the curving lines of the gate can still (somehow…) be dimly made out. On opposite walls, two more shadowy drawings of woods and/or clearings: Ascent I (2008) and Approach (2008).

Refer to underlined Murakami passage: Long after the firefly had disappeared, the trail of its light remained inside me, its pale, faint glow hovering on and on in the thick darkness behind my eyelids like a lost soul.

Outline Rafferty’s sun-bleaching process, whereby an image is ‘faded in’ to cardboard by exposure to sunlight through a glass stencil. A version of technique used in earlier work at Artspace – (the making of) a temporary home theatre using the sun-bleaching frame in an orchard and Brick Veneer II (XL) (2007) – in which shadows were created by furniture in a sort of stage set installed in a timber/cardboard frame outdoors. Exposed/bleached cardboard then exhibited as framework for viewing video of said structure in orchard. Again the half-built house forms a provisional gallery space, ie. even our viewing experience is a construction.

Consider sharing quiet encounter with artist’s family while viewing Ghost Mountain: (Older woman says to child, ‘that’s the view from John’s window, when he was a little boy’, and to man, ‘that’s your parents place, isn’t it, from the island?’).

Regarding images as ‘unfinished’ subjects of construction and interrogation – worth noting that Rafferty presents a specific picture to us in a number of guises: as a family snapshot, as a building block in a work of fiction (a movie, a story, even an installation, since Ghost Mountain is a kind of exposition of process), as a theatrical and even magical object (in the home cinema, appearing to burn into the cardboard as it fades). Hence the image of a particular landscape takes on our own projected associations and anxieties depending on the context we view it in, our relationship to it, and how it figures in our personal memories or experiences.

It later transpires that I have misheard ‘Ireland’ as ‘the island’.

Compare how Ghost Mountain works (disconnected atmospheres that allude to a real and personal narrative) to either a half-remembered dream or the scaffolding of an abandoned novel.

MOP website informs me that the Cooley Mountains have a particular foreboding relating to myths and the troubles of Northern Ireland (Rafferty’s grandmother warns that ‘evil still lurks among them’), however my impression of an isolated colonial homestead on a rocky Pacific island, home perhaps to restless natives and impenetrable interiors, is stubborn to dislodge.

Note at this point Rafferty’s engagement with place and remembered landscapes, having lived in Ireland until moving to Australia at the age of six. All borrowed films are Australian and would likely be considered significant moments in the construction of an Australian collective identity, as defined by and against an unfamiliar and threatening wilderness.

The final ghost I am left with is the cumulative recollection of teenage video marathons, of childhood fears and holidays and the curious intermingling of lived experience with cinematic imagination. In this displaced and reconstructed home theatre there is a kind of vicarious pleasure in unwittingly appropriating the memories of others through the trace of their captured image, particularly those of a ‘compositionist’ 1 as deft and thoughtful as Rafferty.

Murakami addendum: And then, after hovering there for a few seconds as if to watch its curved line of light blend into the wind, it finally flew off to the east.


All photographs taken by the author