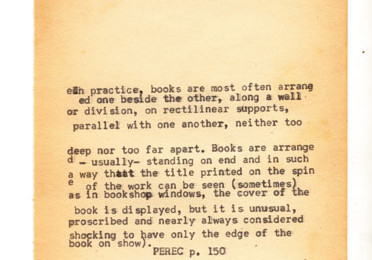 [A review of Notes on The Art and Manner of (Dis)arranging One’s Books*, which took place in September 2008 at CarriageWorks as part of the LiveWorks festival of live art./ First published in December 2008 in runway Issue 12: Make Believe. Reproduced courtesy of The Invisible Inc.]

2.
Over the last ten years rather surprising things have come to be called sculptures: narrow corridors with TV monitors at the end; large photographs documenting country hikes; mirrors placed at strange angles in ordinary rooms; temporary lines cut into the floor of the desert.

3.
The vast foyer space housed a handful of large-scale works that could be called ‘live’ sculpture: an inflatable dome that is also a cinema; a curving ‘whisper room’; a woman giving foot-baths to seated, spotlighted participants in a circle of hand-felted shoes of human hair.

4.
The strange and beautiful building materials that lay in a tangled heap just near the loading dock.

5.
What a wonderful building, moving in itself, held up by itself, forming figures, giant wings, canyons, and high mountains … and suddenly, there: a door so far off that maybe only birds have ever felt that kind of distance.

6.
Behind these, an altogether quieter construction, consisting (first) of a narrow wooden desk holding a flashing, half-open contraption, from which also emerges a tapping sound and a bundle of red wires strung over a high concrete wall.

7.
The walls are high. … I go there often, searching for objects that can be found nowhere else: old fashioned, broken, useless, almost incomprehensible.

8.
Someone is moving around in the next room, coughing, dragging his feet, moving furniture, opening drawers.

9.
Racing up a staircase, we saw, from the gallery above, a crowd of grey-haired people with umbrellas examining a gigantic mock-up of the universe..

10.
The artists present an ever-changing installation; a working studio environment that they inhabit intermittently throughout the exhibition period.

11.
I took in the piece of plush that hid the one-legged table, the shiny upholstery of the only armchair, and the two little threadbare pancake-cushions of Algerian design on the other two chairs. The mantelpiece served as a bookshelf.

12.
They sat perched at the edge of room: one intently operating a telegraphic device whilst peering over the wall, the other typing loudly onto a yellowed, uneven spool of paper that also spilt over this wall.

13.
In his hand he held a book, which he was reading attentively.

14.
In fact, both looked to be transcribing from books held open in front of them. Text in faintly scrawled chalk also appeared on various surfaces both inside and outside the room.

15.
The narratives are neat, often grafted from the metafictions or hypertexts of Borges and Calvino, as a kind of dazzling annotation of those writers.

16.
Reading these disembodied passages, it becomes evident that the work is playing with (and off) site, engaging in stilted and appropriated conversation with both its immediate location and its broader contextual environment.

17.
The narrator, realising that everything is collapsing, rushes from the house to watch it fall under the moat, the reflection eating the original.

18.
Like some kind of unhinged research machine, it spits out a recreated textual narrative in response to everything within sight – the contested suburb it finds itself in (‘It was from Redfern that so many political marches, for citizenship, for land rights, set out to rallying points in the city’), Sydney’s urban history, the industrial relics of this former railyard, the performance events happening nearby, the pneumatic form at the other end of the foyer, and especially that which comprises the installation itself – books, cases, writing, telegraphic communication, sculpture.

19.
These operations are superfluous, they replicate what’s already there and make it proliferate like a disease.

20.
The source of these often fictive fragments is a temporary public reading room housed in a battered traveller’s trunk

21.
Twenty shelves, five long shelves per side, cover all the sides except two; their height, which is the distance from floor to ceiling, scarcely exceeds that of a normal bookcase. … Also through here passes a spiral staircase which sinks abysmally and soars upwards to remote distances.

24.
What is public and what is private is not entirely clear in this lichen-like space stretched over and around its smooth concrete wall. Of those that actually discover the reading room, some stop at the top of the staircase and peer in, as though watching a live, silent performance; others settle in on the rug to read their favourite lines aloud.

25.
Sometimes in the mornings they would have a businessman looking for his umbrella or a schoolgirl looking for a lost coat.

26.
More and more spidery text collects around the walls of the building and on these makeshift introduced objects.

27.
It is certainly not an elegiac mood but, rather, one of anticipation.

28.
The spool of paper looping down over the wall grows slowly but steadily longer, finally pooling in a heap on the ground beside the desk. I realise they are endpapers and title pages of weathered paperbacks, sliced out and sutured together with masking tape.

29.
To perpetrate acts of violence upon the venerable printed word is regarded by many still today as ‘disturbing’, even when committed as a means of reinvention.

30.
Australians have so little of the built past to remind them of their history. If they go, the opportunity will be lost forever to see and feel a greatness as it existed. History will exist only in books.

31.
The book is interrogated as an everyday object and as a repository of authorised knowledge and shared history. If literature is recast back onto real space, dismembered and exploded outwards, will its scattered debris tell us anything new about location, about memory, about the poetics of a place which is real and messy and very much at stake?

32.
Collage is like a grid, a promise and a condition of discovery. … It is the will to place oneself in a lineage that takes all of past writing into account. In that way, you bring your personal library to life, you reactivate your literary reserves.

33.
And then the masquerade draws to a close. The bald little prompter shuts his book, as the light fades gently. The end, the end.

*Notes in this text were (mostly…) drawn directly from the installation.